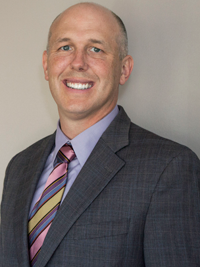 Bernard’s legal career began after a moderately successful stint as a high school football coach in Leonia, New Jersey. Capitalizing on his Bachelor of Arts in English from Rutgers University, Bernard contributed to the Transportation Law Journal while enrolled in law school at the University of Denver. During his second year in law school, Bernard was honored to begin working as a law clerk at Nathan Dumm & Mayer P.C. and now proudly continues his career as a trial attorney, and shareholder, with the firm. In 2005 Bernard revived his coaching career in youth soccer, earning the 2011 Colorado State Recreation Coach of the Year.

A substantial part of Bernard’s practice is devoted to the defense of Workers’ Compensation Claims. During the course of his career, Bernard has completed countless hearings before the Office of Administrative Courts and petitions to the Industrial Claims Appeals Office.

Bernard has also defended law enforcement in a variety of civil rights claims, including the Jefferson County Sheriff’s Department in the cases arising out of the tragedy at Columbine High School. Along with the firm’s late partner, Andrew Fisher, Bernard wrote the briefs that led to the early dismissal of nine out of 10 cases. Schnurr v. Bd. of County Comm’rs, 189 F. Supp. 2d 1105 (D. Colo. 2001). Bernard also argued an appeal before the Tenth Circuit, resulting in the latest statement of law regarding the appropriate parameters for a protective sweep, and creating a significant advancement of the law in this area. Fishbein v. City of Glenwood Springs, 469 F.3d 957 (10th Cir. 2006).

In more recent matters, Bernard appeared before the Tenth Circuit Court of Appeals and successfully argued to confirm the Summary Judgment in favor of members of the Rifle Police and Public Works Departments, and an attorney fees award in excess of $200,000.00. Caraini v Meisner, 521 Fed.Appx. 640 (10th. Cir. 2013). Bernard also won a verdict at trial in the Gilpin County District Court establishing a public roadway for the City of Central by prescriptive easement. 2014 began with Bernard earning the reinstatement of a Denver Police officer after an eight day hearing before the Denver Civil Service Commission.

Bernard was admitted to the Colorado bar in 1994 and is licensed to practice law in all State Courts in Colorado, as well as the United States District Court for the District of Colorado, the Tenth Circuit Court of Appeals, and the United States Supreme Court. He is a member of the Defense Research Institute, the Colorado Defense Lawyers Association, and the Denver and Colorado Bar Associations. Bernard also served as a member of the Federal Bar Association’s Committee on Pattern Employment Law Jury Instructions.